October 22, 2018
When you have an intact, healthy sense of worth, you value other people. You realize that people are different. You understand that people see things and interpret things in different ways. You do not compare yourself to them, nor do you feel the need to compete with them. You know who you are, which means you can accept others as they are.Until Today

I decided to take in the towns off the Essquibo River yesterday, as usual asked no questions
We cross the river using a very huge and long draw bridge onto "the other side" drove for about another hour and there we were on a pier. Ok, so far so good.
Then I saw the boat that I would be entering to cross this river, which by the way is so huge! Seems smaller compared to the Nile, maybe it was my extreme concern about the boat
The boat was a small wooden structure that held a maximum of ten people - to me 7 too much
The captain said the wood never sinks, whatever happens the boat will float!
Well I have none of that type of wood in me so what's going to happen to me?
Thanks for the tip cap!

I got on the boat and we took off to 4 small towns, I am amazed at the simple life that still extists, people were chilling in their hamocks with their families, talking and laughing in the first town
The second town was where they say the gold is! it was bustling and busy, boats at the dock were in and out, people were on a mission
The third, Sloth Island was peaceful and calm, I really enjoyed that stop
We stopped at a waterfall next, the water was brown, they told me its because of the minerals. I will accept that, just wont be bathing in it, no offence!
Then it was time to leave
The tide rose, I looked at the wood, I reminded myself that the wood will float
The Captain said we would have to go slow as the water is too rough
A river yall? With waves?
We spent 2 hours on that river, it was rough literally and every other way
Nightfall hit, the place was pitch black, I started singing songs to take my mind off the fear
David Rudder was the choice!
I was so happy to touch land, I cannot even begin to explain!

One more day in Guyana, the adventure continues
Peace

Popular posts from this blog

January 24, 2020
Rather than think about what you have to do to change a situation, consider what the situation might be doing to change you. How it might be seasoning and transforming and growing you. You are not responsible for everything and everyone. Allow that as a possibility. Jessica Dore


There are some situations that are simply in your life showing you how to shift, how to be flexible, to grow, to transform.
You long for change, yet you cling so to the familiar.
You are so afraid of what you think you will lose.
You are even afraid to lose the things you don't want.
The familiar becomes your family, regardless of what it is.
let's redefine "lose"
I define lose as opening up to a new possibility
The day I stopped saying that I lost my house, lost my marriage, lost my mind, things shifted for me The shift has to start inside How we define and relate to the circumstances in our lives transforms how we act.
I started asking myself different questions - what am I learning? What am I display…
Read more

your light is extraordinary

September 12, 2015
even if you are a small forest surviving off of moon alone. your light is extraordinary. — reminder. nayyirah waheed.
I finished eating the plate of posho and spinach. She asked me, “Why do you play small?”  my first reaction was that she was talking about my weight. I responded, “I play small because I work out” and I chuckled.  She gave me a blank stare! “Do you know that you have a responsibility to yourself, to your ancestors, to your spirit?” Ok now it was getting serious, now it was time for me to pay attention.  “What do you mean?”  “It is your responsibility to excel, to glow, to do what you know you can do. “It makes no sense holding it all back! What are you saving it for? Why do you give one single thought to what other people think? Those who are for you and what you stand for will remain, the rest are passing through on your journey, leave them, and continue along your path! Please, honour your responsibilities, your purpose and your ancestors. There is no way that you wil…
Read more 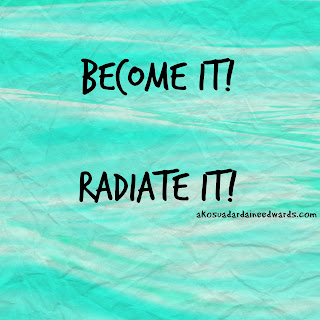 What is being of service? Looking upon another human being with kindness and compassion and not judgement is a profound act of service and though such a form of service lacks for whistles and bells, this expression of “service” comes from truly understanding the power of your soul and what it means to “look upon another with eyes of grace.” Carolyn Myss

Akosua Dardaine Edwards - Author. Speaker.Coach
This blog is reflects the lessons and stories of Akosua Edwards, proud Trini, on her travels throughout the world in service of women entrepreneurs. Presently, she is living and working in Uganda, East Africa.